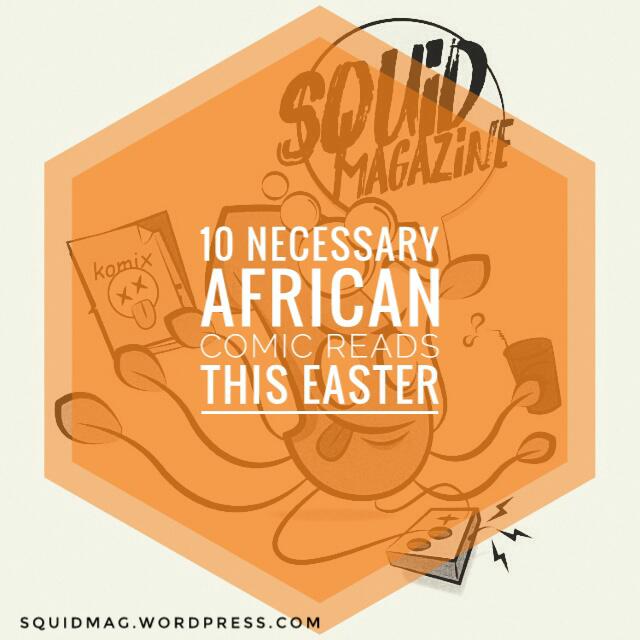 Easter holidays in Ghana (and possibly the rest of the world) mean a long weekend when most of us get to take a break from work. Some people visit family and friends, others go out to chill. Others like us, snuggle in bed and binge on all the things they’ve been unable to keep up with. If you’re big on fresh and unique forms of African entertainment, this list of African comics will hold you down this holiday season.

Dive into the wacky childhood adventures of Sango, the Yoruba Orisha of thunder in his quest to become the next Olorun of Orun (the spiritual realm in the yoruba mythology). This lovely comic by our Kiyindou Yamakasi is four issues deep with no plans of stopping and is highly recommended by everyone on the team! Here’s my take on the introductory issue. Read it for free here.

2. Eru by the Ezeogu Brothers

Fear is a strong drug that either consumes you or is manipulated by you for your own goals. But what if you are fear itself? What will you do? Join Eric Kikuyu, a Lagosian professor by day, and anti-hero/vessel of fear by night. Read the entire series here.

Who says being a superhero (read warrior, so Kevin doesn’t have my head) can’t be fun especially in an age where narcism is all the rage? Thanks to social media, young Kwezi whose name translates from Xhosa as star shines with his superhuman strength, ability to fly and more. That is until an ancient order comes knocking at his door with advice and a mission. Read the first issue of Kwezi for free here.

The Star Wars universe is replete with many wondrous creatures and beauties. But not many black people and definitely no African perspective. That’s probably because it hasn’t had African minds in the creative process. What if that changes? Salim Busuru’s Rovik is a fanfic comic set within the same universe as Master Yoda and the ultimate raspy-voiced badass, Darth Vader. Read it for free here.

If our first Squidtropolis hangout with Hafeez Oluwa was any indicator, the guys at MAD! Comics are here to switch up the game. With just four – incredibly short – titles, this crew’s very raw and grungy art, coupled with their dark, uncensored stories are just what just what the doc prescribed to snap out of the Easter blues. Tap into the dark side here.

Imagine humanoid dogs, cannon blasters, plasma guns, mechas and villains called Darklaw, in an alternate dimension where humans are extinct (and possibly myths). That is Ganyamuto, a fable about a stubborn, reckless pup prophesied to save his world from an impending apocalypse. The comic was authored by Tinodiwa of ComeXposed, a geek collective promoting geek culture within Zimbabwe.

RED ORIGINS is an epic sci-fi magical-futurism webtoon the creators claim will rock your world! The comic is part of a long-term plan for an animated seires that was succesfully backed on Kickstarter.  It was created by Kolanut Productions, an up and coming independent animation, comic, and game productions company. The blurb goes: It’s 2070 and three friends are mystically transported to Neo-Africa. In order to return home, they must stop a brewing war between Ancestral and Technological Africa. RJump into the world of Red Origins here.

9. Agbara by the Kalu Brothers

Illustrated and created by Chima & Kelly Kalu, Agbara tells of a fallen angel’s exploration of what it means to be human after her banishment from heaven. Her banishment is a result of  her neutral stance in a war between Angels and Demons. Read this interesting tale here.

Go for a trippy adventure with this Ugandan comic. Here’s the author’s description: Based off an African Folk Tale, The story follows a young boy (kakama) who is set out to destroy a vicious demon that has terrorized the world and killed his family. Watch as the story unfolds revealing immense drama, action and comedy in the world where the youngest hero will put all to an end; or will he? Get into this psychedelic action for free here.

If none of the listed comics cut it for you, maybe this satirical collection of gags and parodies can help. Produced by Wob3tekpa, these comics provide hilarious and sometimes sexist commentary on daily life in Ghana. There’s bound to be something that cracks you up in here regardless of your humour threshold. Get cured of boredom here.
_____________________________________________________
Whatever your Easter is like, boredom cannot be part of it. Enjoy.
By KaDi Yao Tay aka Squid Meister.

Dunamis: Hope for the Marginalized

2023: The Year of Ground-Breaking African Creative Projects – From Disney Collaborations to Independent Productions