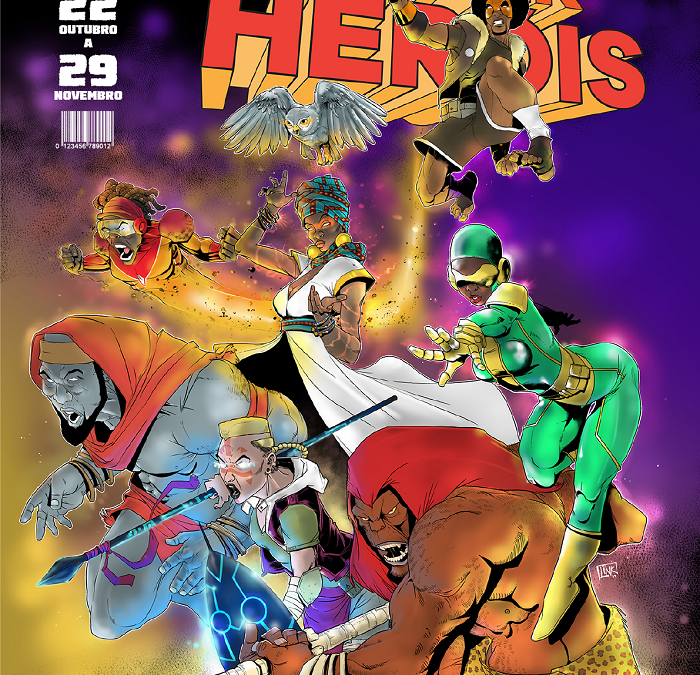 This post was originally written to highlight the SUPERHEROES: Comic Book and Video Games from Africa exhibition at Maputo Fast Forward 2019 and later turned into a brief overview of African comics by Bill Masuku. It has further been edited for clarity and further context by Kadi Yao Tay.

In recent years, there have been a handful of comics and videogames produced on the African continent to see the emergence of a set of works whose central protagonists are “superheroes”.

This trend has been referenced by international media, reviewed by commentators and expert critics, and has even deserved the attention of the academic community (see, to name but one example, the issue of the journal “ Journal of African Cultural Studies” whose main dossier – “ Afro-Superheroes:Prepossessing the Future ” – is entirely dedicated to them ).

This exhibition, produced jointly by Maputo Fast Forward (MFF) and the Comexposed collective in Zimbabwe, with the support of Camões – Portuguese Cultural Center, aims to make known some of the works produced on the continent, the creative studios and the authors who developed them and, above all, to contribute to the contextualization of this “phenomenon” through a reflection on the particular and specific characteristics of these “superheroes” in the wider context of the emergence of “new narratives” in Africa and movements such as “Afro-futurism”.

As we reach the end of the first 5 years of modern African comic book publications, it is heartwarming and inspiring to see how far we’ve come as a medium of entertainment, art and literature.

And yet here we are in the last quarter of 2019, and we’ve now seen countless comic conventions that amass tens of thousands of people a day validating them as entertainment.

On the entertainment front, we are beginning to see comic books cross over into animation with the likes of Malika: Warrior Queen. For art, we are witnessing two major art exhibitions (JAG, the Art of Comics) that validate them as an art form.

In the span of two months, there have been two other comics as art (and literature) exhibitions in Ghana. First with Lake of Tears and City Living No Be Easy at Nkabom Literary Festival and secondly with Made in Germany: A Massacre in Congo* along with the previously mentioned comics at Pa Gya! A Literary Festival in Accra.

On the literary front, at Pa Gya! A Literary Festival in Accra, African comics have been a constant part of the conversation on literature with panels, workshops and roundtable discussions while at Aké Arts and Book Festival, there is the NOMMOs, an award scheme for speculative fiction where comics & graphic novels have their own awards category.

We are also starting to see them sold in bookshops and stocked in libraries making them undeniably a part of the literary world.

Before we can praise them in their different media catergorisations we must extend praise to both the fans and organisers of all their local/international events that have acted as early adopters to products that had little public faith.

The comic conventions across Africa, in their various countries, have done an outstanding job of bringing together the comic creators themselves to an accessible point to meet a willing and wanting audience. Before bookstores opened their doors to comic works, these comics were and still are the primary point to purchase African made comics, telling African stories.

In no ranking or particular order the major events that have acted as comic cons are as follows:

The growth in visibility has been amazing, in no small part to the people who work tirelessly to ensure that the general public even knows where what, and how. The development of an industry is standing on the quiet success of journalism specific to that field.

For World Cups, there are sports journalists, websites, and articles that give insight into individual player’s performances, match statistics, announcements, and active discussions predictions and projections. Movies, games, and serialised television shows are no different, with many media outlets discussing the choices behind casting a character, how closely content follows the source material, the directors if the film has reshoots, box office figures, and Rotten Tomato Scores.

For comics across the continent, 3 media bodies work diligently to highlight the emerging industry:

Kugali, the Nigerian-based company began as a podcast and curators of all speculative fiction content that was coming out of Africa whether it was comics, games, movies, or tech they had an every growing record of it all – including interviews with the creators themselves. Using that as a stepping stone on which to rebrand and restructure, they are currently publishing content via their comic anthologies and subscription service.

The company has also recently branched into storytelling using virtual reality to create a more immersive experience for audiences.

Squid Mag, based in Ghana acting much like Kugali (before turning to publishing) curates any and all content that puts a spotlight on creations from any and every country in Africa. While it aims to cover games, animation and comics from Africa, Squid Mag has primarily focused on comics, animation and digital illustration.

Squid Mag also recently begun curating a database of comics, video games, animation along with talent and the studios actively creating in a database it calls Bahari Blue. Operating out of Ghana, the collective has organized and been part of different events such as Comics and Smoothies, Pa Gya! A Literally Festival in Accra and the Accra Animation Film Festival promoting African content.

BrainWavez, in South Africa, does the same with a focus on South Africa. With so many events happening within South Africa’s borders, the vast majority of the content that debuts is often missed or out-shined when placed in the same presence as international guests and headliners. Brainwavez does an amazing job of giving new artists credit where it’s due.

With the stages set, the next 5 years of comic book creation in Africa has many expectations to catch up with the likes of international powerhouses DC, Marvel, and Image Comics in the United States, Shonen Jump in Japan, Dargaud in France.

Among these expectations to name a few are: clear legislation for comic book intellectual property, partnerships that develop lines of printing and distribution, marketing and advertising with and for characters, strategic guidelines to crack down on piracy, adaptations into live-action series, animation and film, as well as the gazetting of printed units, sales, and profit margins.

*Made in Germany: A Massacre in Congo is an international journalistic comic by a French – Burkinabe artist, El Marto and a French journalist.

Bill Masuku is a 25 year-old comic book artist and writer, born and raised in Harare, Zimbabwe. He is the founder of Enigma Comix Africa, as well as the creator of Razor-Man and Captain South Africa. The former of his works has gained him growing acclaim in his hometown spearheading the local comic industry forward and has consistently appeared in all Kugali Anthologies so far.

Pa Gya – Lighting the Path to a Creative Paradise