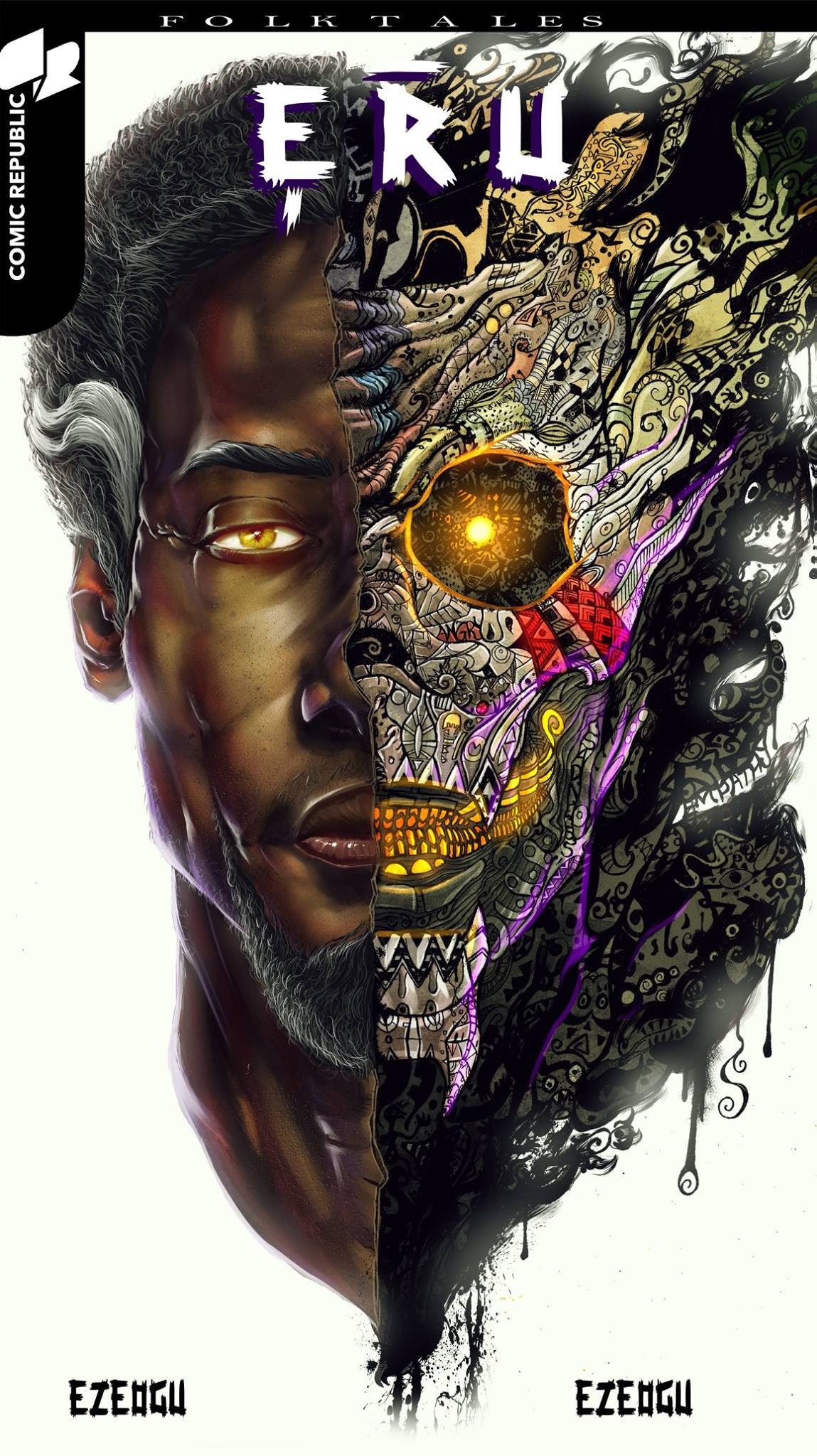 Cover of Eru by Tobe and Oz Ezeogu.Published by Comic Republic
Illustration

Lake of Tears is a socially conscious graphic novel that explores the menace that is child trafficking on the Volta Lake in Ghana. According to the creators (Setor Fiadzigbey, Kobe Offei & John Schaidler), at its core, “Lake of Tears” is a story of captivity and redemption.

Set against the backdrop of Ghana’s hazardous inland fishing industry, this beautifully drawn, imaginatively written graphic novel will be released digitally in four free installments.You can read the first part of this African graphic novel at www.LakeOfTearsGhana.com and check out this interview with Setor Fiadzigbey.

Gambanyika is Zimbabwe’s greatest hero and probably it’s most loathed. At least that’s the impression we got from the prologue of this comic by Tinodiwa Zambe Makoni.  According to Tino, Zimbabwe’s first hero, , has protected Zimbabwe for 8 years now undefeated, but that may soon change as he faces his greatest challenge yet, a challenge he can not face alone. This is the beginning of Mhare (Translates to Warriors), Zimbabwe’s Greatest Defenders, Zimbabwe’s first super team. Ready for a trip? Read the prologue here.

Set in a fantasy African outer space, Kayin and Abeni is an comic about two cousins who roam the universe, accomplishing all kinds of missions for all kinds of employers; even the shadiest of them. Those missions will lead them to see wondrous things and wage difficult battles to find themselves in their war-ridden world. It is illustrated by the ethereal brush strokes of Juni Ba and written by Keenan Kornegay out the first issue at this link, https://gumroad.com/juniba and peep this interview we had with the creator.

Olwatuuka, is a Ugandan comic by Louis Lubega that weaves intricate stories around African folktale with dreams and present reality. The story follows a young boy (kakama) who is set out to destroy a vicious demon that has terrorised the world and killed his family. Watch as the story unfolds revealing immense drama, action and comedy in the world where the youngest hero will put all to an end; or will he? Get into this psychedelic action for free here.

Strike Guard was created by Ayodele Elegba (Lagos Comic Con) and tells the story of Abolaji Coker, who gets a second chance at life by playing host to the spirit of an ancient Yoruba hero, Ajagbeja as well as superhuman/supernatural abilities. Devastated by his best friend’s death, Coker takes up the Strike Guard persona to honor his friend’s fantasies as an evil-fighting superhero aided by his new-found powers. You can read Strike Guard for free here. Also, check out this proof of concept animation for the series.

Our friends at Kugali put together an anthology of African comics – some of which we’ve written about (Dunamis, Oro) – that features some of the best of African art and storytelling. The mag pushes 3 different comics set in different parts of Africa, or space, or fictional worlds inspired by Africa every month. You can check out the first and second issues over at the Kugali website

Orisha Pikin is a darling that’s dear to us. Created by Squid Mag contributor Kiyindou Yamakasi, this adorable comic reimagines African gods and deities as well as gods from other cultures as children. Imagine Sango the god of thunder as a devious little child who’s up to no good. That’s what you get. Check out our review of the first issue of Orisha Pikin and read the comic here.

8 years back, a vigilante rescue team sent to Agoh village located in the Niger Delta region of Nigeria, arrived too late and met the villagers dead; slaughtered by greedy folk of the ruling elite who step on helpless people and rip them off. They ravaged the entire village and left no witnesses. Or, so they thought.

What happens when a group of young Nigerians come together for a common cause? Justice or Vengeance!
Read Metalla the 13th here.

Money. Murder. Mayhem. Even in futuristic Nigeria, boys are still not smiling. Ok, we have no idea what this comic is about save for the fact that this cover excites us. This cover was released as a teaser. As far as we can gather, this is a reboot of an old comic by Sewedo Nupowako. What we managed to scrape from the interwebs is this little snippet.

What would Nigeria look like in 2145 AD? Nupowako’s ACE Comics takes a guess in Naija Hardkore, with its totalitarian but orderly world where Lagos’s yellow Molue taxi buses are jet-powered and fly, but policemen still accept bribes. – NaijaComics.blogspot.com

A comic book story set in the Star Wars world, it follows Rovik, an inhabitant of the planet Dukongo, a mineral-rich planet with an abundance of Agrocite (a rare ore that has the capability of acting as a powerful fuel). The mineral is now almost completely depleted on the planet except in the small Brazzaville area. This is where we encounter Rovik, already halfway through his journey in the dense rainforest. Read our thoughts on Rovik then dive into the comic here.

Set in fifteenth-century West Africa, Malika – Warrior Queen (and in our opinion, king of epic fantasy) follows the exploits of queen and military commander Malika, who struggles to keep the peace in her ever-expanding empire. This striking cover was put together by Mohammed Agbadi.

In a far future, an evil Nigerian scientist bent on world domination cracks the quantum space-time continuum theory and creates a time machine. His intent is to reverse reality in the past so he can reign supreme in the future. Talk about sinister. Thankfully, a group of young special elites in the tactical division of the Nigerian police force jump time with him to put an end to his ungodly campaign. Equipped with futuristic gadgets and abilities, they are put in an unwinding pursuit against the mad doctor. Read the adventures of the Amazing Tek Kids here.

Eric Kukoyi is not a normal man. He doesn’t age or sleep. He lectures at the University of Lagos, also doubling as a part-time psychiatrist and parapsychologist. When night dawns, where creatures haunt corners and crime rears its head, he becomes the one thing any of them will ever fear, he becomes fear itself.

Bound by oath to haunt the night as a force of retribution. The people of this city have called him many names, but one echoes the loudest: ERU fear itself, walks among us. This has got to be our favourite cover.

Just look at that amount of detail! Kudos to the Ezeogu brothers (Tobe and Oz) for pulling this off.  Read Eru here.

Where do we begin with this? The story is a little confusing but the art is a delight to behold. Created by Zimbabwean artist Kudzai Gumbo and set in Brazil, it tells of a young man, Pooya’s initiation into the Oversoul Corp, some sort of super-enhanced military in a slum where you have two choices, the grave or the military. We’re patiently waiting for subsequent instalments to better grasp the story. Read Paper Angles here.

This is the story of an amateur boxer turned hero. It follows the tale of Ismaila “Eazzy” Kazeem, an amateur boxer struggling to go pro whose desperation leads him to an African priest and a charmed armband that goes berserk. Tapping into what’s left of his conscience, he’s inspired to use his newfound power for public good and thus birthing the most unlikely ghetto hero, Boxsa. Boxsa is part of Spoof Animation’s foray into African comics. Sound like your kind of story? Purchase Boxsa here.

We dare say this has an uncanny resemblance to YouNeek Studio’s Malika. But that might be a long shot seeing as it’s the only other epic fantasy comic with a female lead.  It’s a story about Barikisu, a reincarnation of warrior queen Amina who continues to defend her clan (and crown) from a vile clan of warring warriors with a centuries-old score to settle.  The art in this comic dazzles and you should read it. Check out Barikisu here.

The comic shares the adventures of a young narcissistic man, Kwezi, who discovers he has superpowers, is part of an ancient race that pre-dates humanity and must set off on a journey to save the world and find his purpose. The cover above is pretty nice, but what really impresses is the cover below which was released last year.

Which of these wonderful comic covers most excite you? Who did we miss? We’d love to know. Kindly tell us in the comments below and don’t forget to share this list to help someone looking for brilliant stories to read.

Man Must Chop Wins Big At The MTN Apps Challenge 5.0

Get Your Inks Ready for KugalInktober