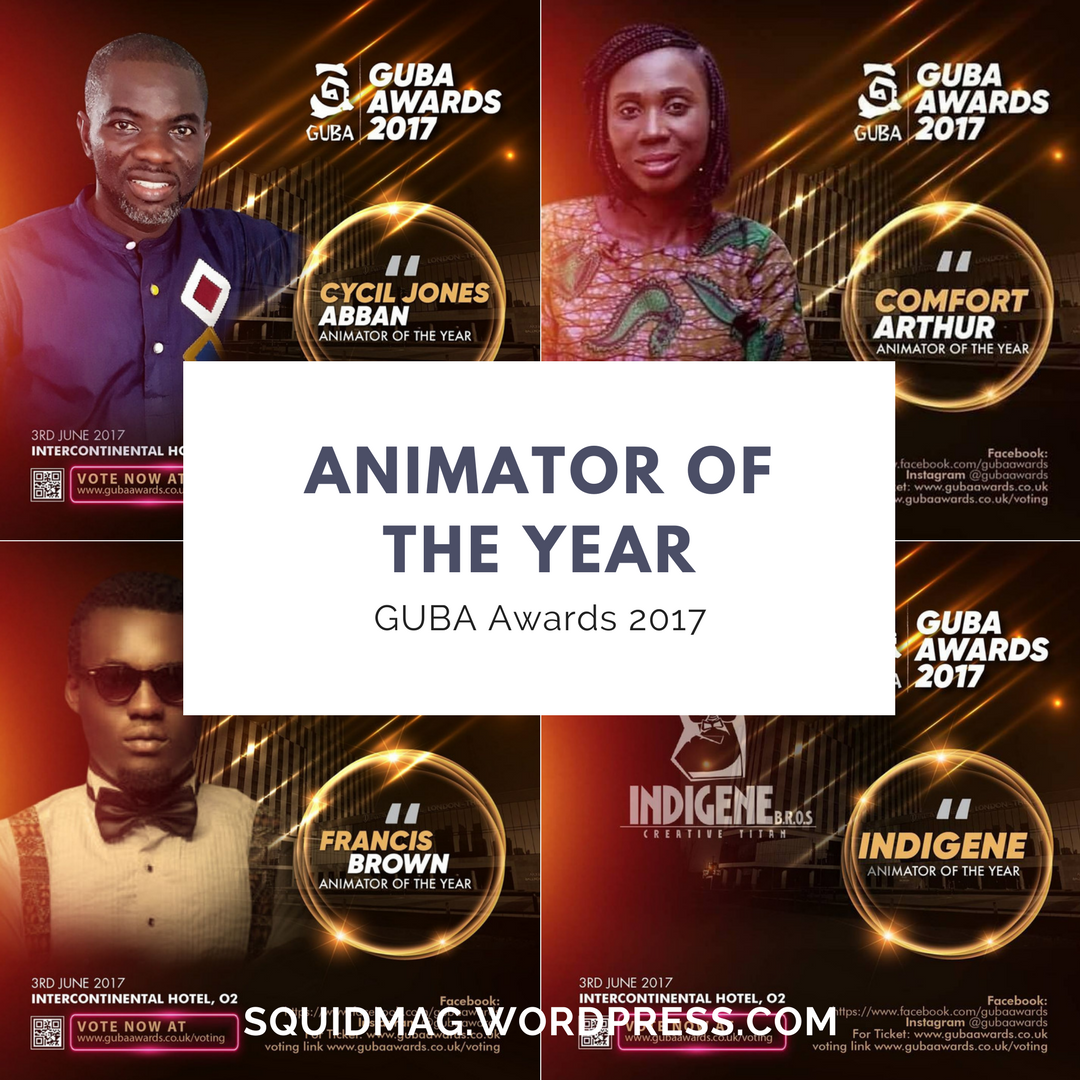 The mantra for a while has been to change the future of African movies through storytelling and an excellent medium to do this is through animation. An even better way to encourage stories in this beautiful medium is to reward creators for their hard work and consequently, promote them to a wider audience. That’s exactly what the Ghana UK Based Achievement (GUBA) award scheme is about to do and it wins them a special place in our hearts.

In Ghana, animation (we prefer ) hardly comes up as a potent storytelling form that should be taken seriously. So, to see more attention paid to it in recent years through inclusion at the Golden Movie Awards, the Ghana Movie Awards and the MTN Apps Challenge is not only heartwarming, it’s more than welcome.

The GUBA awards have come around again and we’re super excited for the freshly minted Animator of the Year category. The nominated list is made up of the most visible shakers of the animation scene in Ghana. The nominees include Francis Brown of AnimaxFYB Studios, Cyril Abban of Parables Productions, Comfort Arthur and the crew at Indigene BROS, made up of animators like Bertil Toby Svanekiaer of Chaskele fame and Nii Ofei Dodoo.

Voting is open to the public and can be done on the GUBA website here. You can also check out more detailed profiles of the nominees at this link.
The Ghana UK Based Achievement (GUBA) awards is an annual awards ceremony based in Britain which recognizes the ‘hugely significant’ contribution that Ghanaians and British-Ghanaians make to society. The awards were founded in 2009 by UK-based Ghanaian TV personality .

GUBA CEO, had the idea to set up the awards as she felt that there was “nothing out there” that promoted and celebrated the hard work and successes of British Ghanaians. It is projected as a platform that “showcases and celebrates excellence and achievement within the British-Ghanaian community as well as the outstanding and valuable services provided to Ghanaians in the UK and Ghana”.

More recently, the organisers have sought to also involve the wider African communities as they attempt to gain international attention and this possibly explains the nominees considering nearly all of them identify as being only Ghanaian

It’s an exhilarating, sweet and blessed celebration as the number of animators being recognised has surged compared to the 2016 Golden Movie Awards. GUBA’s AOTY category is fresh and one of the few of its kind (digital arts) to be added to varied categories such Made in Ghana Company of the Year and Start-Up Company of the Year.

This hints that the organisers of the GUBA Awards have caught the love bug for animation and how this intricate medium can be used to showcase the talents in Ghana and share culturally relevant stories with the world.

The only drawback for us at Squid Mag is, we wished more animators could have been added. The likes of Creo Concept, Poka Asamoah, Studios, Gyimah Gariba as well as the winners MTN Apps Challenge serve as capable contenders to be nominated.

That notwithstanding, us of Squidtropolis are gearing up for the final announcement of the Animator of the Year with fingers crossed. Will it be Francis Y. Brown whose film will be screened on April 29th at the 8th Classics in the Park, Comfort Arthur, Abban or Indegene B.R.O.S? For those who haven’t yet voted, help GUBA decide via this link.