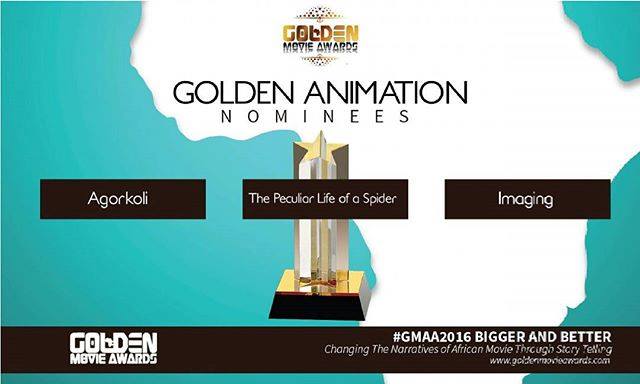 We’re crazy excited to announce that the animated films of Comfort Arthur and Francis Yushua Brown have been nominated in the Golden Animation category of the Golden Movie Awards.

In its second year, the award will for the first time, highlight Ghanaian animation talent. The nominated films are Brown’s school project, Agorkoli: Cause of Hogbetsotso, a retelling of the history of the Ewe people and Comfort’s films, the Peculiar Life of a Spider, a dark comedy abut how Kwaku Anansi tackles issues such as depression and identity crisis and Imaging.

As “an annual award that seeks to honor outstanding achievement in the African television, digital media and film industries”, I can’t help but wonder why only two films have been nominated.

A number of films have been produced within the year of review (January 1st to December 31st) across the continent that could have been nominated.

It makes absolute sense if it was a Ghanaian award scheme but it is not and thus needs to be more inclusive. Projects such as Yellow Fever, for example, are an unfortunate, inexcusable exemption on everyone’s part.

Perhaps like me, creators heard very little about the award or didn’t think too much of it (it is but an infant after all) to submit their projects.

Poking around their website moreover, I can’t help but conclude the animation category was an afterthought. Besides the 2016 nominees page, no mention is made of the category, not even on the category definitions page.

The Grand Jury controls the nature of awards and nominations, so perhaps this was their best decision. However, with a mission that reads, “to change the narrative of Africa by awarding excellence in Africa through film”, I’m surprised animation isn’t highly regarded.

I do hope the potential for animation, which transcends demographics and allows for creative expression in ways traditional film won’t, seizes their minds.

I give them the benefit of the doubt but moving forward, if they truly are about changing the African narrative, they should have animated series like Bino and Fino, Ubongo Kids, Tales of Nazir, Mdu Comics among others on their radar as well.

Regardless, it’s a step in the needed direction for Ghanaian animation (and Africa animation as a whole) and we wish Comfort and Francis the best. A win for either is a win for us all.

Watch their film trailers below.

The Peculiar Life of A Spider

By Kadi Yao Tay [aka The Golden Afromation Consumer]

Update October 28, 2016. The Golden Movie Awards has reinforced my belief that the animation category was simply an afterthought. Comfort Arthur, winner of the category is absent from the winners’ list on the award’s website.  An archived version of the site for confirmation can be found here.