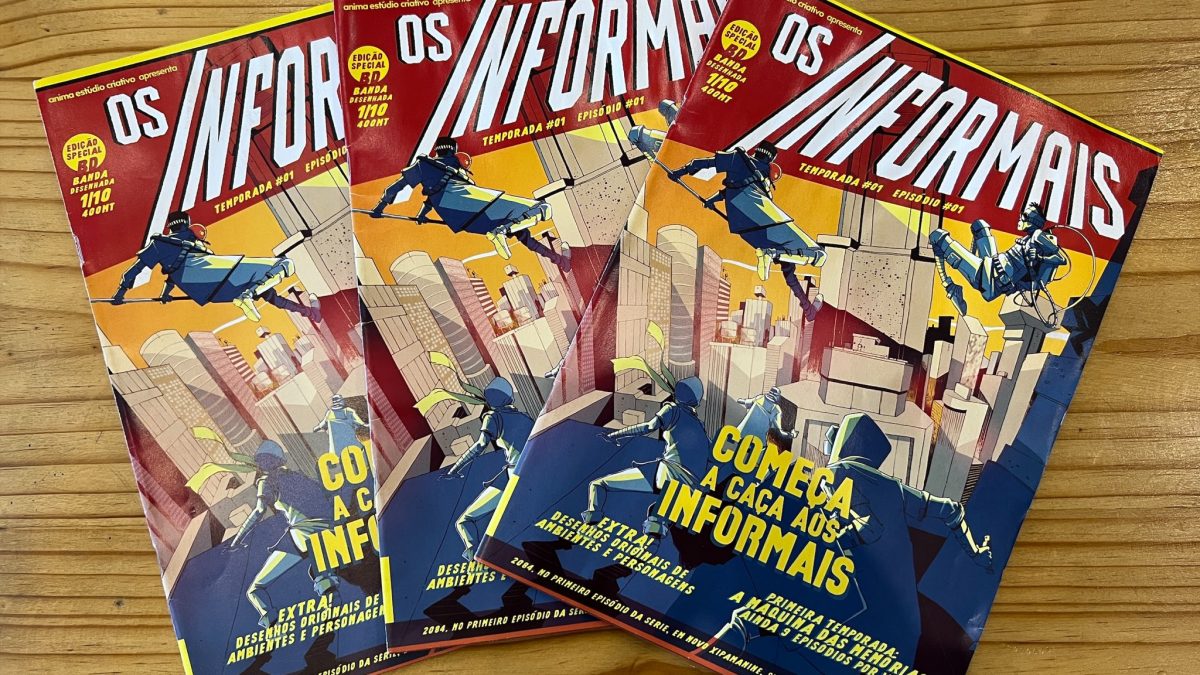 OS Informais – A New Era for the Comics Universe in Mozambique

Imagine a world where everything that comes from the past is suppressed. A world of tyranny where even memory cannot escape the malicious extraction by ambitious thieves who want to transform the city in the image and likeness of their megalomaniac dreams to satisfy their thirst for power. This is the backdrop against which the saga Os Informais, a Mozambican comic book that turned informal workers into superheroes, unfolds.

The narrative of this comic book takes place in 2084 and narrates the interventions of a group of vigilantes fighting the oppression of Alteza, a real estate baron turned political leader. In this futuristic scenario, in which the city center of Maputo was recreated in glass by Alteza, and the peripheral neighborhoods are at risk of disappearing to make room for this new megalopolis, Os Informais – Sakina, Esmalte, Miopia, Esticão and Paíto – fight for a fairer development in which tradition and ancestral knowledge coexist side by side with the future and with new technological inventions.

What Os Informais offers is not only a sense of awakening in adolescents and young people for the desire to read, but also in stimulating critical thinking about social development. The central plot and the main lines of action metaphorize the reality and the daily life of several informal workers in the city of Maputo where the informal market represents 70% of commerce, but there is also an environment of pressure marked by the semi-legality of this activity and the consequent harassment of those involved in informality by the police.

ANIMA creative studio found in comics and storytelling a way to give visibility to these workers who represent a significant part of Mozambican culture. The team behind Informais is extensive, but has mainly counted on the collaboration of João Roxo (Original Concept and Art Direction), Hélio Pene (Art, Illustration, Coloring), Ana Queiroz (Writing) and now Álvaro Taruma (Writing).

The first episode is on sale at bookstores in Maputo and at some second-hand booksellers on the streets of Maputo, with other outlets under negotiation, including the Brazilian book market.

Os Informais represent more than a comic story, the struggle for justice in a social context in which an omnipotent party represses and dominates and, on the other hand, a group of informal sellers spontaneously organize themselves to defend themselves from repression and massive oppression, represents the two opposite poles, of those who are victims of the system, but also of those who benefit from it.

The first episode of the Os Informais saga marks a return to comic books market in Mozambique, a tradition discontinued with the end of the 90s, but which is now scalped within a fantastic and futuristic world.

In 2021, two Workshops were held in Maputo, where children and young people created original narratives and illustrations accompanied by the writers and illustrator of Os Informais. These workshops were an opportunity to get closer to readers and the various media and constituted a gateway to the memorandum of understanding with a higher education institution for the arts for future collaborations and partnerships.

Also browsing through opportunities to translate this universe into animation, in 2022, Os Informais were selected, through an application by Anima Estúdio Criativo (Mozambique) and Sardinha em Lata (Portugal) by the ICA, to support the writing and development of audiovisual and multimedia works and support for innovation. Audiovisual and Multimedia, with the writing of an adaptation for an animated series and the production of a trailer in progress.

This adaptation work for the animation format started in 2021, at the invitation of the South African production company Triggerfish, for the Pan-African Animation Anthology, launched by Disney Plus. From this anthology, six animations from different African nations were later supported, with Os Informais only receiving support for the development of the story, where the collaboration with Peter Ramsey, director of the Dreamworks feature film “Rise Of The Guardians” (2012) and “Spiderman: Into the Spiderverse” (2018) stood out.

It is worth mentioning the original soundtrack of Os Informais, conceived by Nandele, Tushimitsu and Kachowsky, in Mozambique, in 2019, inspired by this Afro-futurist universe, with an experimental and electronic tone.

In Honor of Nigerian Democracy – A June XII Comic Review