> Commentary > On Black Panther, African Comics and The Geeks Core 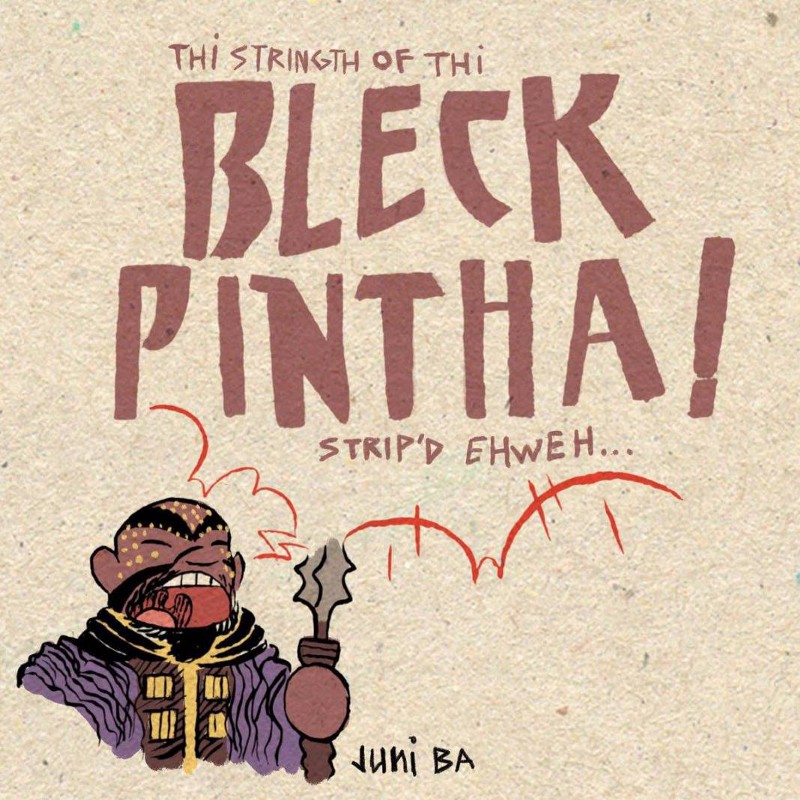 Comic books are a blissful escape into new worlds and fantastical, alternate realities and I am hooked; I always have been. I am very passionate about comic books and grew up on them; they were literally the air that I breathed.

Growing up with that much dedication to comic books obviously meant I would speak about them a lot and social media greatly enabled me. My name is Quarshie Adu Boahene and I am the founder of The Geeks Core on Twitter.

How The Geeks Core Started

It was initially very exciting but I realised not everyone on my timeline wanted to know how The Joker took out Jason with just a crowbar or how powerful Goku is. I decided to create a community where people interested in fantasy, video games, movies, comics and the like could join and have discussions about them.

In Ghana, we barely get anything besides movie premieres, making this community a channel for the world to notice and/or hear us geeks/nerds from our little corner of the world. I wanted to give us a voice. That was the mission! 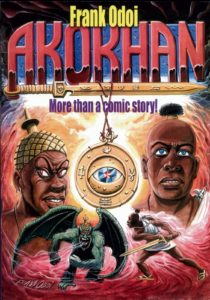 On Sundays, I gathered newspapers my grandma had bought throughout the week and arranged them by days to read the comic strips in them. There were three I really remember, The Amazing Spider-Man, Garth and Akokhan by the late Frank Odoi. Comic books were my safe haven.

Eventually, I discovered the X-men and Thundercats comic books which were a life-changing moment for me because these weren’t just the strips I used to read, these were actual books!

I was, however, a little kid in Ghana with no means of owning such comic books so I had to adapt and I had an idea. I cut out the comic strips in the newspapers and compiled them in three different Note 1 exercise books. That was my very own version of comic books.

I’ve read about a lot of comic book characters growing up. However, I’ve only read about and watched superhero movies of very few black characters. Thanks to the early days of Metro TV and their midnight programming, I got my fair share of these movies. I remember watching the Blade trilogy in one night and that really made me happy.

Black Panther on the Big Screen 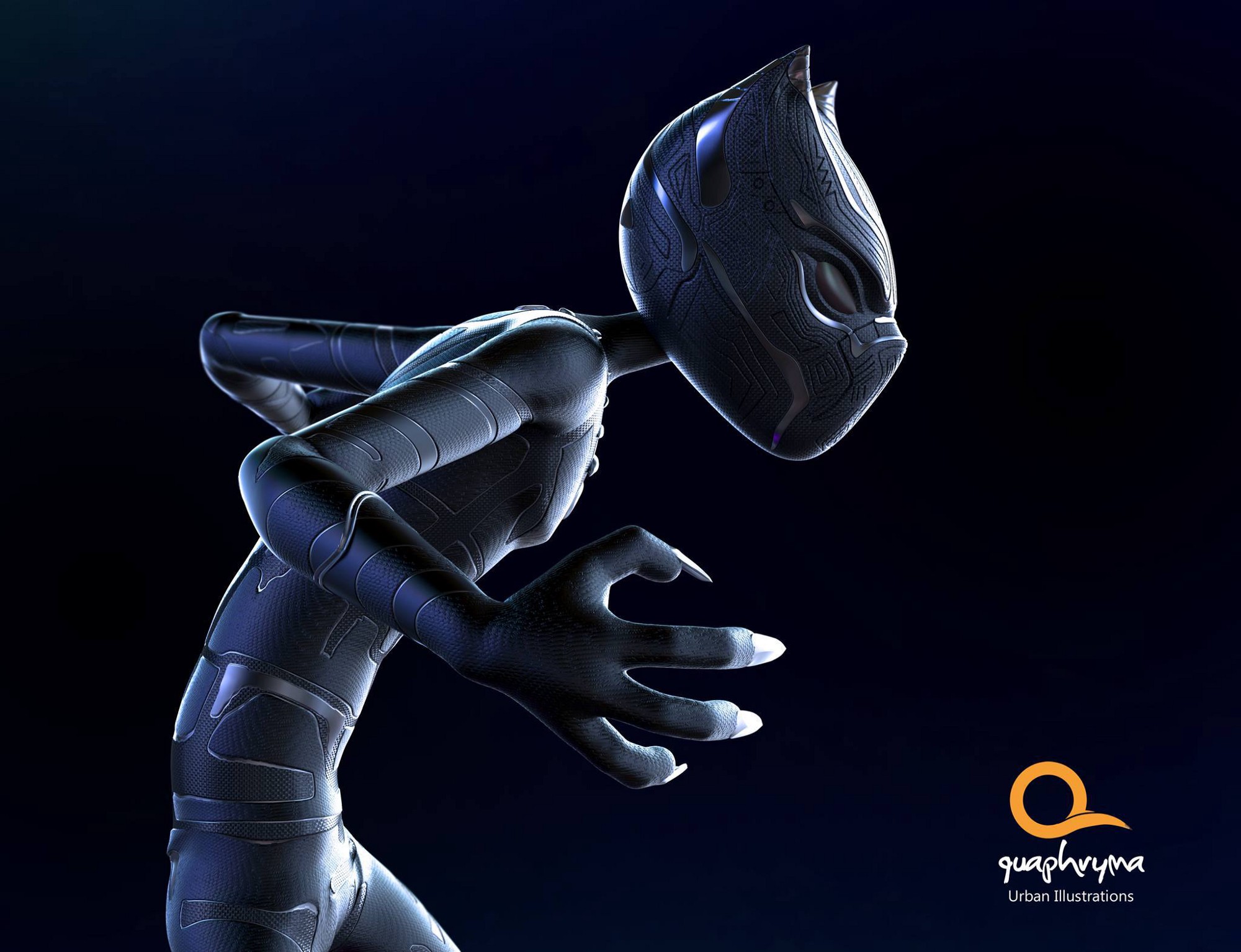 As a long time comic nerd, seeing any character leap from the pages of comic books to the silver screens greatly excites me. Seeing T’Challa, the Black Panther in Civil War made me as happy as I was to see Tom Holland’s Spider-Man debut in the Marvel Cinematic Universe (MCU).

There was something captivating about Black Panther when I first heard of him. That he was from Africa — the same continent I’ve spent almost all of my life — and seeing him assume leadership of a nation meant a lot to me and embodied the kind of rich culture I strongly identify with. Now don’t get me wrong, it was nothing like I’d ever seen before but my imagination did the work.

Wakanda as a country that was never colonized forced me to reimagine what many African countries could be if colonization had never happened. Vibranium represented gold in Ghana for me and the leadership of T’challa was Kingship; no different from what I saw growing up. T’challa is a character who looks like me and is a lot of things that are familiar with my reality. Also, he rolled with the Avengers, knowing very well his technology surpassed the rest of the world; this made me very proud.

It is okay to draw inspiration from people’s support for something that isn’t by us but about us. 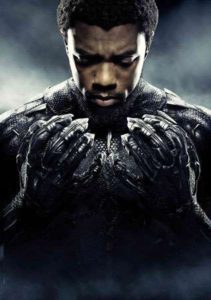 I was elated when the Black Panther was rumoured to appear in Avengers: Civil War. Then came the casting call and Chadwick Boseman got the role; the guy from 42. I really enjoyed the Jackie Robinson movie so I quickly searched and watched other movies he had been in to see his performance; this is a ritual for me and I do that for a lot of actors taking on superhero roles.

As a Ghanaian, it was exciting that this African superhero was getting the spotlight. I have my opinions about the origin of the character — whether or not he was created for us — but that will be saved for another day. 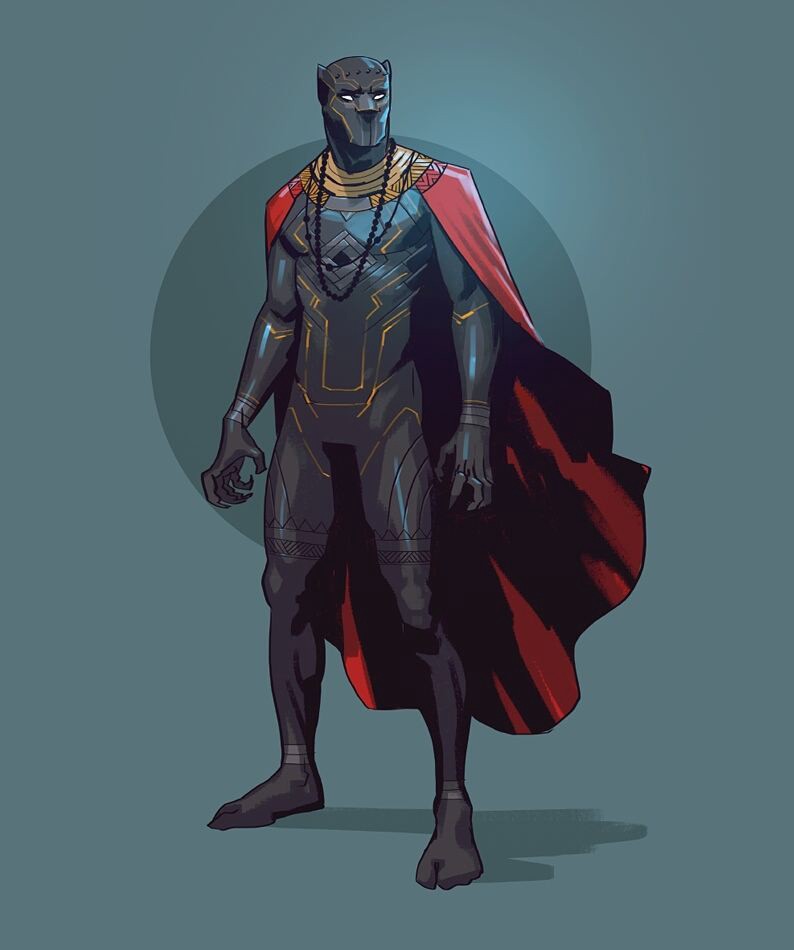 Black Panther premiered in Ghana on the 14th and 15th of February in Kumasi and Accra respectively. The premieres, hosted by Couch Critics was when I witnessed people embracing and celebrating this movie like it was their own. If you check the internet, you’ll get an idea of how many African countries happily welcomed the movie.

This sparked a controversy about the character not being for us and how Ghanaians should put more effort into supporting our own like we did Black Panther. That point hurts because there is some truth to it. This makes the controversy a necessary one because this is an opportunity for African creators and artists to put out their own work. It is okay to draw inspiration from people’s support for something that isn’t by us but about us.

It also shows how hungry we are to see our own out there. I get it, Black Panther and Wonder Woman embodied much-needed diversity and representation in blockbusters and people really appreciated it hence the success of these movies.

It’s okay for black people to feel represented by a character created to look like them, but, feels different from an African perspective. Although I’m happy about this character and movie, there’s always that feeling that this character wasn’t made for us, that Black Panther isn’t an authentic African character.

No, Black Panther didn’t come to erase the history of the slave trade and wars.

Moving on from the controversy, this character and movie really brought out a lot of people showing appreciation all over the world and it’s amazing because finally, the king is here! This movie combined many rich African cultures to birth the fictional country of Wakanda and it was a great experience watching the movie and hearing the cast sound and/or dress like you. 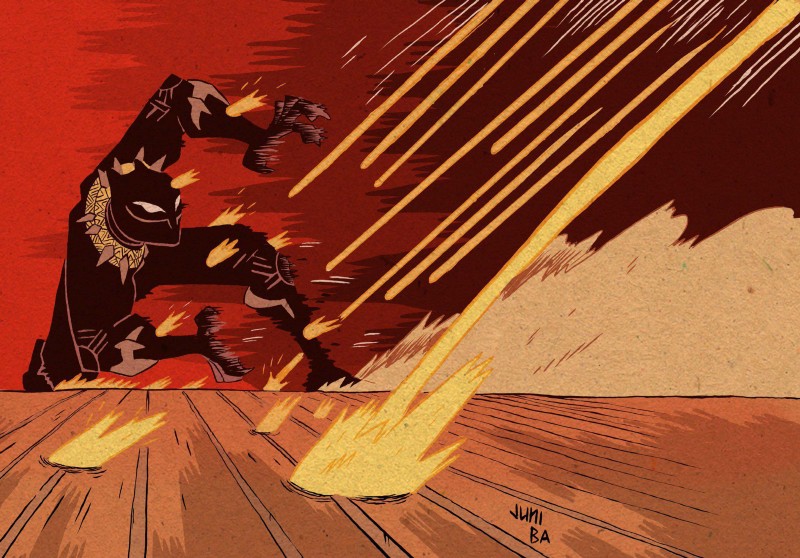 This gave the movie a never-before-seen element in the MCU movies. Black Panther is up there in the ranks of Doctor Strange and Guardians of the Galaxy which gave Marvel fans something different from the usual Marvel movies.

That aside, being able to see African-Americans feel free to embrace their roots and show off something they’d probably never feel too comfortable showing was exciting.

The way Africans also put themselves out there because of the movie, provided a channel for people to see us in a way that they possibly never would. This is the kind of voice that I work on providing every day with The Geeks Core. 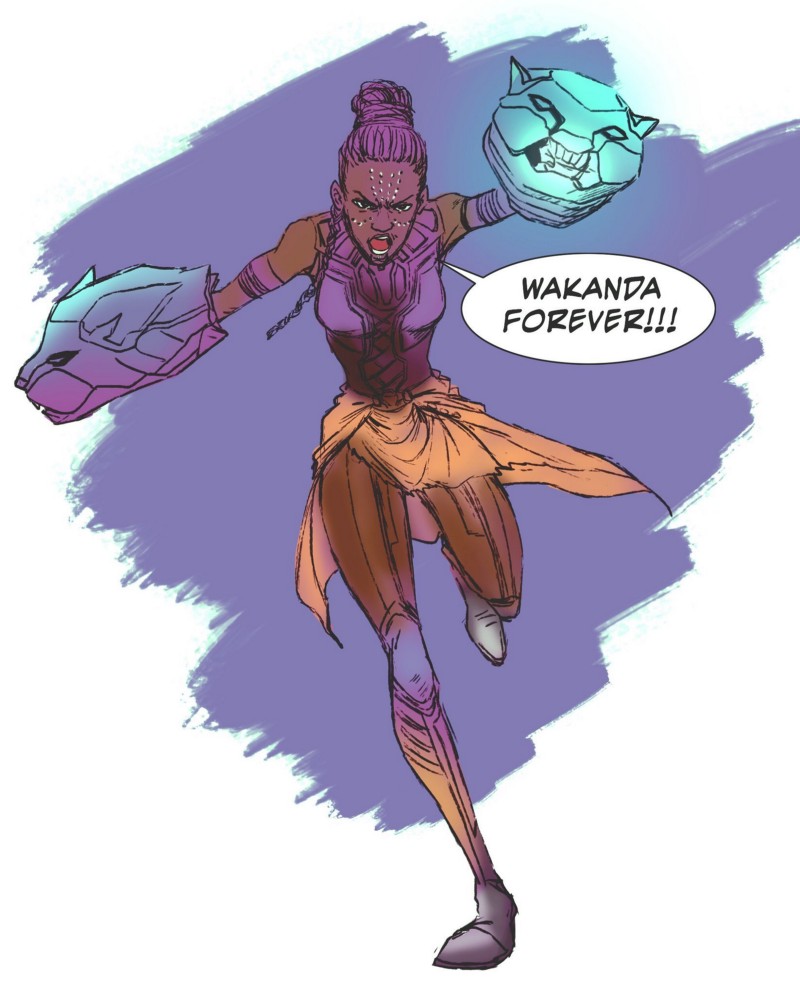 No, Black Panther didn’t come to erase the history of the slave trade and wars.

No, Black Panther didn’t come to solve racial problems but it is the kind of movie that will give a black child the same experience I had when I first saw Blade. A man who looks like me doing awesome things like other mainstream superheroes. But it doesn’t end there.

It will also help them believe in the worth of whatever cultural background they hail from and also push them to become the very same people that will create for the next generation, over and over.

This sparked a controversy about the character not being for us and how Ghanaians should put more effort into supporting our own like we did Black Panther. That point hurts because there is some truth to it.

Representation of any form does matter, but it is only worth something if it is actually shaping the future of the people represented before society brands them in the many stereotypical ways it does. It is important for a child to feel free to acknowledge the worth of who they really are than to grow up different and being asked to show their worth. I think movies like Wonder Woman and Black Panther play a role in those lessons. 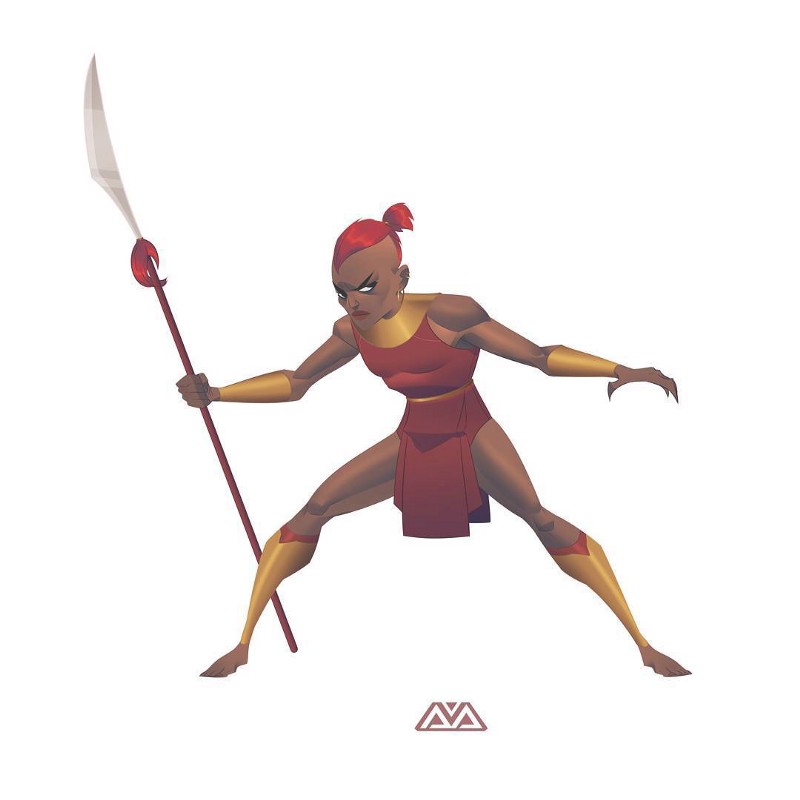 Now back to the necessary controversies. This is where creators from this part of the world come to play, African comics. I believe all the well-deserved support for Black Panther paves the way for people to discover existing and ongoing African comic book publications and to support and learn more about the stories we have to tell.

I can’t wait to see African comic books generate buzz from both our own people and the entire world.

Written by Quarshie Adu Boahene of The Geeks Core.

Quarshie Adu Boahene is a comic book nerd (he calls himself a walking comic book library) and the founder of The Geeks Core on Twitter, where he curates and opines on the latest comics, animation and films. If you’re looking for any geek gear, he’s your guy. You can follow him here or the Geeks Core page.

Boxsa is the African Comic Getting a Movie Adaptation!

Wanna Write a Comic? Here’s Your Chance with TAG Comics

2023: The Year of Ground-Breaking African Creative Projects – From Disney Collaborations to Independent Productions