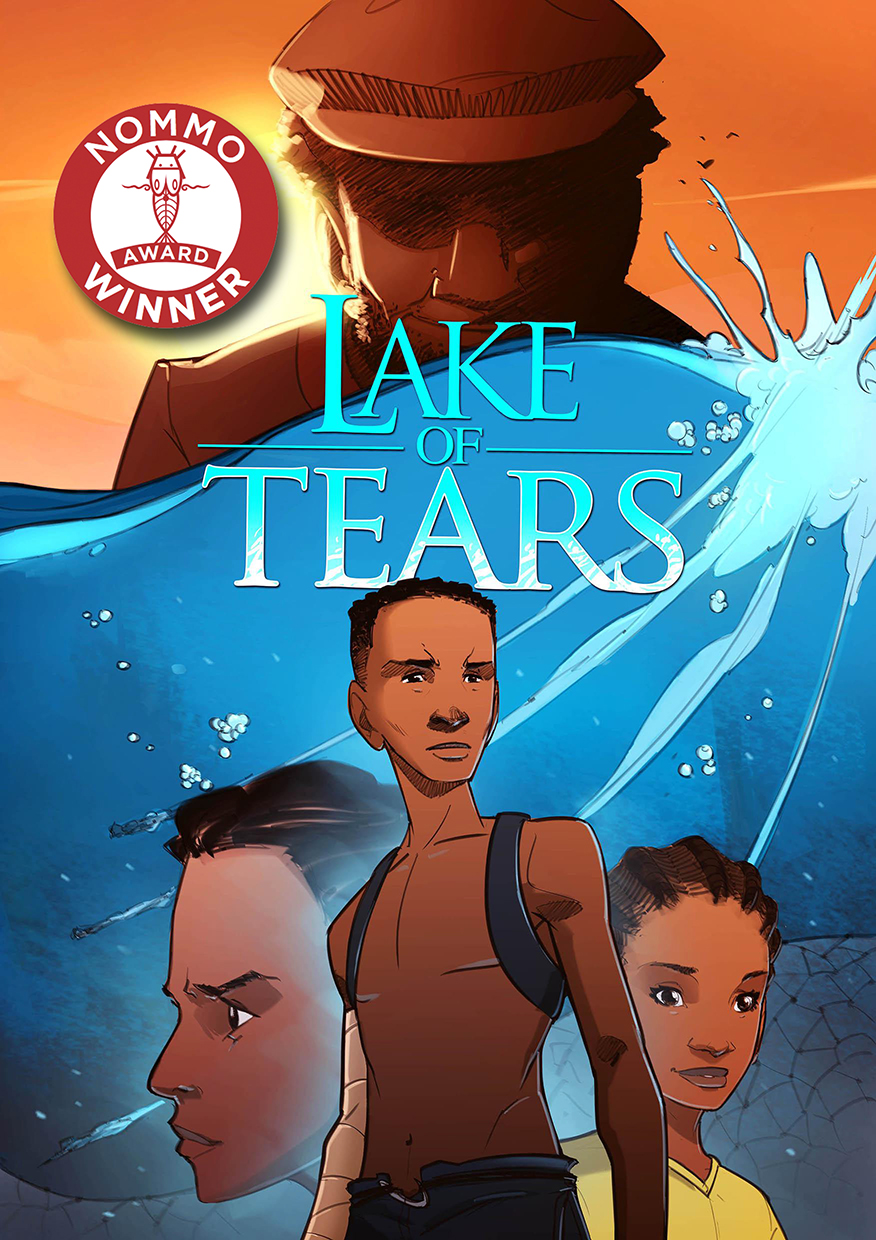 Written by Kobe Ofei and illustrated by Fiadzigbey, this beautifully illustrated, imaginatively written story tells a tale of captivity and redemption. Set against the backdrop of Ghana’s hazardous inland fishing industry, where an estimated 21,000 children currently live and work on Lake Volta, the story features three fiercely determined teen protagonists who come together through unlikely circumstances to put at least one wicked slave master out of business for good.

For artist Fiadzigbey, a previous finalist in illustration for the Golden Baobab Prize and head of Accra’s BZL Studios, it reaffirms the original vision: to bring the highly complex yet largely invisible phenomenon of child trafficking and forced child labour out of the shadows, into the bright light popular culture.

“Young people tend to gravitate toward action-adventure stories,” says the illustrator. “Our goal from the start was to take the reader on an unforgettable ride, while also underscoring the persistent – but highly preventable – tragedy of modern child slavery.”

“It’s one part speculative fiction, one part social cause,” echoes managing editor and publisher, John Schaidler. “We wanted to hook people in with bold, artwork, relatable characters and a fast-paced plot, no doubt about it. But the horrible truth is this: often, slave masters can buy a child for less than the cost of a net. Everyone should know and understand the brutal reality of these harsh economic conditions.”

Indeed, an entire criminal sector caters to the whims of unrepentant slave masters. Shadowy middlemen prey upon destitute families with too many mouths to feed or impoverished single mothers struggling to survive. Twisting Ghanaian traditions of kinship, patronage and vocational apprenticeship to suit their corrupt purposes, these traffickers buy and sell children as young as five and send them to Lake Volta.

Surprisingly, perhaps, though comics and graphic novels have been used all over the world to educate and inform people about a vast array of subjects, Lake of Tears appears to be the first project of it’s kind from Ghana.

“I think for those of involved with the project,” says Kobe Ofei, who penned the action-packed script, “if readers walk away from this story wanting to learn more about the problem and how they can become some small part of a the solution, it will be a huge success. Hopefully the NOMMO Award will give us a massive signal boost.”

“To be honest,” says Yao Tay, co-founder and Editor-in-Chief of Squid Mag, an online platform devoted to African digital art, comics and animation, “until I heard about this project, I had no idea child trafficking was still prevalent. I would have never guessed the magnitude of the problem. The way the graphic novel is able to balance this deeply uncomfortable truth with such fantastic art is truly incredible.”

“We are tremendously proud of this book,” says Schaidler. “As anyone who follows African comics and graphic novels well , Nigerian comic creators have been at the forefront for years, producing world-class, work. It’s especially gratifying to win this award in the presence of so many industry greats. To call it humbling is truly an understatement.”

“Lake of Tears” was originally released digitally, in four free installments via Facebook and the Lake of Tears Ghana website. Part One was released in November 2017, with Parts Two and Three hitting the web in early 2018. The fourth and final chapter was released in July, 2018.

A special Aké Arts and Book Festival edition of “Lake of Tears” was produced in conjunction with . It is currently for sale in Nigeria and Ghana. An anthologized version of Lake of Tears is forthcoming, soon to be available in the U.K. and E.U.

To learn more about how you can help to end child trafficking and forced child labour in Ghana’s fishing industry, wherever you are in the world, visit the Challenging Heights website. There, you can download Challenging Heights Ambassador Toolkit which features social media images to share on your personal feed, a fundraising flyer, FAQ sheet and more.

The Nommo Awards recognise works of speculative fiction by Africans.  This encompasses science fiction, fantasy, stories of magic and traditional belief, alternative histories, horror and strange stuff that might not fit in anywhere else. Members of the African Speculative Fiction Society nominate works and vote for winners on the ASFS website. The award is 2 years old with the maiden edition launched at the Aké Festival in Lagos in November last year.

Pa Gya - Lighting the Path to a Creative Paradise

Squid Alley with ed. – I’m Looking to Find the Devil