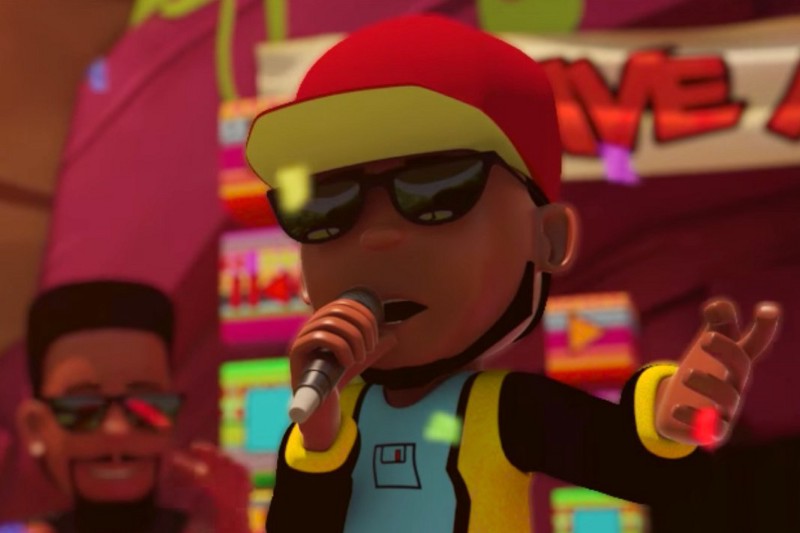 Delighted first and foremost because that’s putting out more of the content I love to consume (hurray African animation) and because the artists are hopefully making money from their passion. Special shouts to Jayso (rapper/producer) and especially Poka (illustrator/animator/ king of Ghana cartoons) who have consistently collaborated to create animated music videos. Poka is to Ghanaian animation in 2017 what Zingaro Productions was to cartoons in the 90s.

Below is a roundup of Ghanaian animated music videos released in 2017 (reverse ordered by time of release).

Okay Africa describes this video best, “Gwarn is the ultra-smooth collaboration from British-Ghanaian producer Juls and Nigerian star Burna Boy. This animated music video follows Juls and Burna as they serenade their girls in through several hilarious scenes. Watch them both lounge with their girls in this incredible Poka directed video. — Kam Tambini”. is another artist (co-incidentally a producer too) who heavily incorporates illustration in his track covers and animation.

“Everything check like e be , and if it’s a dream I don’t wanna wake up soon” croons Worlasi on this song off his Nuse album. The animated video traces Worlasi’s life as a kid with a hyperactive imagination and a vision he sees on how to make his dreams a reality. The video is as simple as it gets and feels like an animated instructional video that swaps hard facts and figures for engaging storytelling. The video was animated by Cameroonian singer Lor, with whom he has a song too.

My Wave is a delight to watch. The video combines animation and live-action to deliver engaging visuals. The animated bit follows Juls rocking out a concert with his collaborators, Odunsi the Engine and Sona while the live-action bit centres around hosting a photo shoot. Poka again proves why he is a consistent name in Ghanaian animation by handling the animation bit in this video.

Have a Party is Ghana’s first 3D animated music video and who better than Jayso to own the song? In an unpublished interview with the animator, Bertil Toby Svanekaier, this video took a year to make! The result? A fun, hilarious, geeky, pop culture-heavy and wildly fresh take on what Ghana’s animated music videos can be. I loved the Azonto dances by the tribesmen, and especially the offbeat, weird dancer (no idea what s/he was doing but it’s hilarious). What didn’t I like? Gosh, Raquel looks overly objectified and unreal. Oh, by the way, I think the product placements were very nicely done.

If there’s any music video that religiously follows the song to the letter, then this is it! Are we all superheroes? Worlasi definitely thinks so. Hallelujah Yesu is a motivational song where Worlasi entreats everyone to be better versions of themselves, to stand out, work hard and essentially be their own heroes! This video is animated by Animoumou. (Many blogs have wrongly credited Kwame Amity as the animator when he’s only the producer responsible for the beat).

I am King is a really groovy video with just the right animation aesthetic to match. Produced by Parables Animation Studios, the video sees Gemini and M3dal explore what being King means to them. From the playing cards, swords, pizza and a show of patriotism, I am King is a pretty fun ride.

A magic wand, a fiancé, a spy, a white pegasus, a magic carpet and an unloved crime lord. This video tells a corny story of Edem “rescuing” a true love from the arms of what I can only assume to be a man forcing himself on a young woman. I’m meh about the song and not fond of the video. Considering how uninspiring the song is, Poka made an effort to bring some life to Edem’s first animated music video.

Another Poka animated and directed video. Poka lends his animation prowess to Akwaboaha to tell a story of heartbreak, what ifs, loss and rekindled love. This is the most solemn Poka project I’ve seen so far and shows an edge to Poka I’m curious to see in a full-length movie. Hopefully.

What happens when Lion King, Michael Jackson and Nazir (from Louicage Studios’ Tales of Nazir) meet for a video shoot? The animated music video below I think. Okay, to be honest, I don’t get this video. Why is it here? Well, it’s by another prolific animator, Louis Appiah and is a comeback for Okra who’s been MIA for a long time. The video is all over the place for me and very confusing. But it has it’s moments I have to admit. It’s mostly hilarious and judging by the YouTube comments, people totally dig it. I’m still on the fence. What do you think about it?

How do you say take your nonsense away in your language? Fa Sor Ho is how it’s said in Akan Twi and that’s the basis of the story in this video. A big take your BS someplace else from a made man to a former lover so short-sighted she ditched him for riches. Cliché, but that’s the bane of many musicians and this video follows it ditto. The animated music video is a fan-made project by Startoon GH an, affiliate of Wob3tekpa Comics.

This Year Go Pap translates as this year will be awesome. In many ways, last year, 2017 was pretty good. In here, Laud de Poet shares his aspirations for the year ahead of him through spoken word poetry. The video was animated by Riddle Delanyo Sabblah and without it, this piece fails to hold my attention. There’s even a nice shoutout to the unnamed legend on Ghanaian and Nigerian primary school exercise books.

Happy independence day Ghana is probably how this animated video should be named. It’s a song by Deon Boakye celebrating Ghana, asking for blessings, pointing out things wrong with the nation (there’s a lot), a clarion call on Ghanaians to hold their country dear to them and above all, an unabashed love for the country in spite of her ills.

2018 is already looking pretty awesome with an upcoming collaboration between Worlasi and Poka. Hopefully, there’s more. Here’s a fun collection of the coolest Ghanaian animated music videos ever by Unorthodox Review.

Kadi Yao Tay is an improving social inept constantly navigating the maze of human interactions in a bid to figure out his place in the world. He has an unbridled love for kelewele (spicy fried plantain) and abuses the word "chale", chale. He also sucks at soccer video games and absolutely won't play against you. Do not ask! Oh, also, editor-in-chief on this site, producer of the Accra Animation Film Festival, Head of Content at Raptures and editor of Noanyi, YPKI & Once Enough.

These Powerful Women Are Shaking Things Up in African Animation