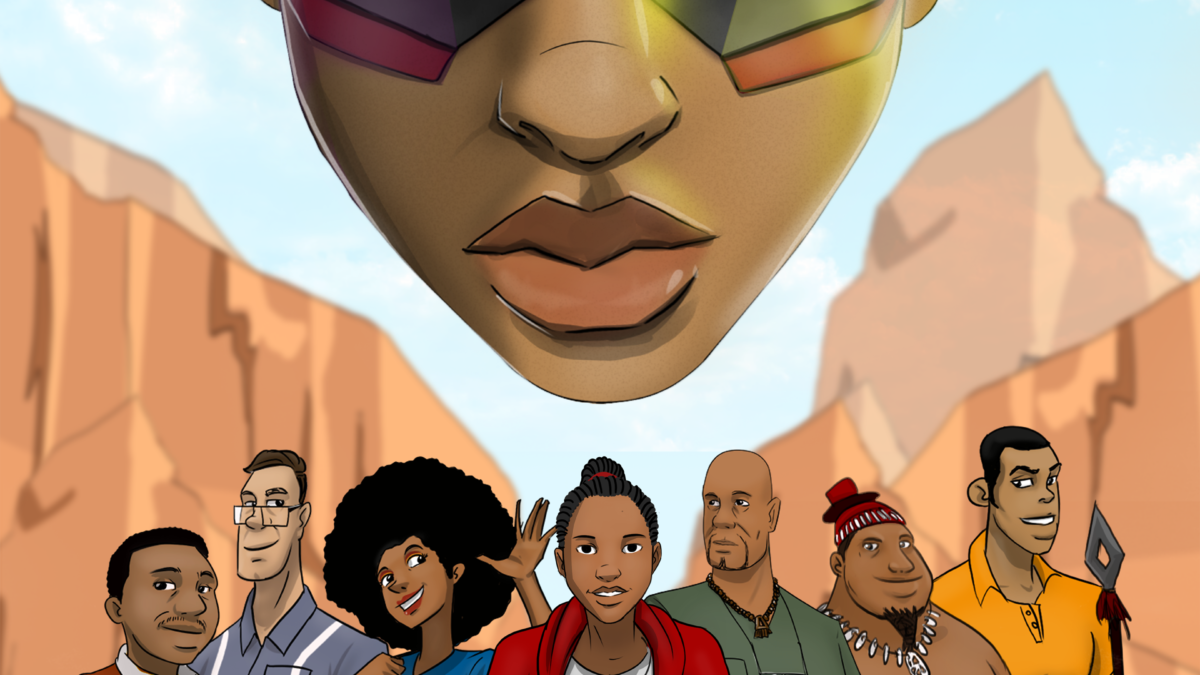 In a world where superheroes abound, full-bodied and a fantastical extension of what we’re already familiar with, Farida Bedwei’s Karmzah is a fresh take. Farida, a technologist and disability rights advocate in collaboration with Ghanaian creative studio, Leti Arts recently launched the hotly anticipated Karmzah to an eager crowd.

Tuesday, October 30th at the Leti Arts HQ will forever go down in history as the day Ghana’s first comic book with a disabled protagonist was launched. In fact, as Eyram puts it, “Karmzah is the world’s first Cerebral Palsy superhero!” This isn’t true however but as he jokingly added, “we are claiming it.”

The launch featured a brief overview of what Leti Arts as a trailblazer in the African comics and gaming industry does, live portrait illustrations by Daniel Kwartey and Quaphryma and of course, a breakdown of how Karmzah came to be.

The idea for Karmzah was conceived in by Farida in Kigali (Rwanda) while listening to Eyram Tawia during a session on Leti Arts and the beautiful art of comics. According to Farida, she wondered why she’d never seen herself represented in comics before.

She loved the craft but had never read of a superhero with her condition, Cerebral Palsy. Cerebral Palsy is the number one disability in children globally and yet somehow, in 2018, there weren’t any comic books that people living with the condition could find solace in.

So she thought, “if there’s something you want that isn’t there, why not create it”? Farida wanted a story she could immediately identify with so it just made sense to create one. Farida’s imagination ran wild as she fine-tuned her idea.

Eyram explained how he was happily hit with the “Farida hypnosis” and shortly after, he and Farida along with a wonderful team of supporters and creatives worked on the comic. Farida hopes her creation will improve social attitudes towards people with cerebral palsy and other disabilities.

Asked about the meaning and origin of the name Karmzah, Farida explained it was simply inspired by the need for a domain name (a website name). She played around with names on domain name providers to see what was available. Luckily, Karmzah was and sounded cool so she took it.

Karmzah (real name Morowa) is an archaeologist who gets her power from her crutches that she has to use for her cerebral palsy. From the first issue of the comic (available on Afrocomix), her power seems to originate from an ancient Malawian artefact she was studying.

Cerebral Palsy is a disability that affects movement and posture and is the most common disability in children. According to a report on perceptions of cerebral palsy in Ghana last year, “many parents with Cerebral Palsy children are contemplating killing them as others have already done due to the frustrations they are going through as a result of lack of support systems”. In Ghana, it is believed that one in every 300 children in Ghana has cerebral palsy.

You can find out more about CP in Ghana here.

According to Farida and Leti Arts, the plan is to release four issues of the comic every year. Eyram Tawia has also hinted at a possible animated future for the comic series. If done, Karmzah would become one of the very few (animated) film comic book adaptations in Africa.

Implications of Karmzah for African Comics

Africa’s fledgeling comic book industry flourishes everyday as new stories are created and more players enter the space. This has birthed diverse perspectives and fresh stories that cut across. While the majority of the comics are purely escapist fantasies, very few are woven around social issues. Karmzah joins the likes of Dunamis (Kenya) and Lake of Tears (Ghana) which use comics as a tool to bring awareness to the plights of minority groups. Dunamis does this wonderfully for albinism and other disabilities, Lake of Tears for child trafficking in Ghana and Karmzah, for Cerebral Palsy.

Karmzah was made possible by Farida Bedwei, who conceived and wrote the story. All art – from concepts, characters, lines, inks etc – was led by Ravi Allotey and supervised by Kwadwo Quaphryma Frimpong-, both Accra based illustrators from Leti Arts. Eyram Tawia, CEO of Leti Arts produced the comic. Every superhero needs theme music and popular media personality Anita provided the riveting song.

The comic is available exclusively on Leti Arts’ Afrocomix comic reading app. There’s presently only one issue (6 pages long). In an interview, Farida says there’ll be 3 issues every year. The first print issue of the comic, however, will be available sometime in December. This could make for the perfect Christmas/end of year gift for loved ones.

Read Karmzah by downloading the Afrocomix app from the Google Play Store.

Below is a documentary by the BBC on Farida Bedwei’s comic book. See images from the launch by Rexford Nkansah here.

Farida Bedwei is a software engineer, public speaker and writer in Accra. She is the Co-founder and CTO of Logiciel (Ghana) Ltd, an author and a disability-rights advocate, and has been featured on many local and international media platforms including CNN, BBC, MSNBC Africa, etc. She is a Young Global Leader in the World Economic Forum.

Leti Arts is a  content company that aims to bring an authentic Africa to a worldwide audience, through meaningful games and digital comics. The company celebrates the continent’s vast histories, and cultures and pit them against a backdrop of contemporary Africa – proving that African-created content has an essential place on the global stage. The company was founded by two pioneers in the African video games industry, Wesley Kirinya (Kenya) and Eyram Tawia (Ghana).

Update: An earlier version of this story stated that Karmzah was the first superhero comic with Cerebral Palsy. This is false. There are other superheroes, such as Edward McDonough. This was corrected on November 8, at 7:32am.

16 African Superhero Comics You Should Check Out (2020)