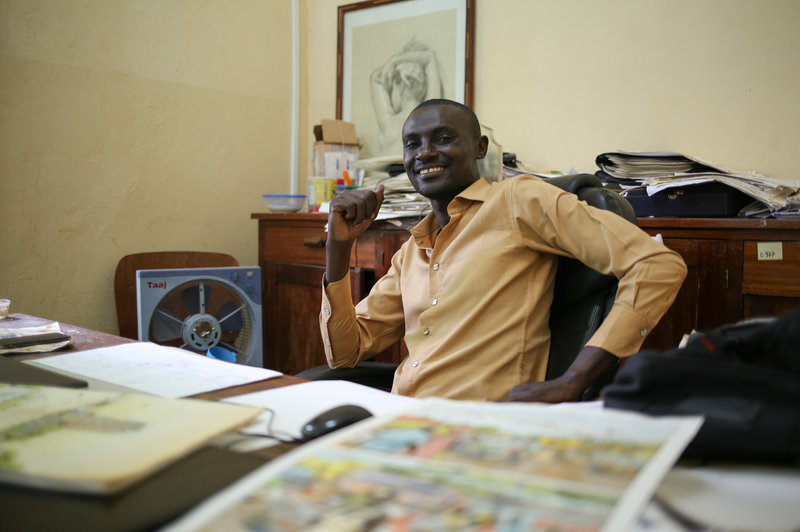 Didier Kassai is a comic book artist from the Central African Republic who spreads life-saving messages in the comic medium. Story Cassandra Vinograd for NPR.

Behind pea-green curtains in a steamy office in the Central African Republic’s capital of Bangui, comic book artist Didier Kassai carefully dips his paintbrush into a nut brown pigment on his palette, wipes it on a scratch sheet then slowly puts it to paper. His brush strokes bring a watercolour to life – itself a scene of death. The brown is used to colour the butt of a rebel’s gun in a strip chronicling his country’s spiralling conflict.

Kassai is one of a small coterie of comic-book artists in CAR using their work for social good — in a struggling and impoverished country. CAR’s government wields little authority beyond the capital. Armed groups control vast stretches of the country, where roads and phone networks are at best unreliable. Even Bangui — with U.N. peacekeepers everywhere — is not immune from violence. Last week more than a dozen people were killed and scores wounded in clashes in the capital. State services like health-care, meanwhile, are in short supply.

That’s why comic strips like Kassai’s have such power: They’re a means of reaching a struggling population with valuable information about navigating daily life and survival in turbulent times.

The front page of the local L’Hirondelle newspaper regularly features a comic strip. Aid organizations and U.N. agencies throughout CAR commission comics drawn by Kassai and his colleagues on a range of topics: wound treatment, sexual violence, security, sanitation, health services, how to turn in weapons and more.

“They [comics] can transmit a message,” 42-year-old Kassai explains. “The work I’m doing now is to raise awareness. The most important thing is to recount what is happening in CAR.”

The Central African Republic has been plagued by conflict since 2013 when a predominantly Muslim rebel coalition overthrew the government. The rebels committed atrocities on their path to power and largely-Christian militias formed to fight back.

Thousands died in sectarian violence. While the deployment of a U.N. peacekeeping mission helped stem the bloodshed, violence has spiked over the past year. As of the end of February, the number of displaced civilians was 694,000 — the highest since the conflict began.

The upsurge in violence comes as more than half the population of around 4.6 million needs urgent humanitarian assistance – with the U.N. calling the situation “dire.” CAR ranks last on the world development index and and the adult literacy rate is just 36.8 percent – meaning that reaching the masses through written messaging isn’t an effective option.

“There’s a big struggle with diffusing information here,” Mercy Corps country director Rodolphe Moinaux says. “A lot of people can’t read or write so the images can speak to them.”

That’s why aid organizations and other agencies hire artists like Kassai, printing their work as posters, leaflets, billboards and manuals.

“[Comics are] easier to understand, you can reach children,” echoes Duccio Staderini, a spokesman for a coalition of international NGOs in CAR. “It works – people are crazy about it.”

There was no real comic-book culture when Kassai was growing up near the northern city of Birao. But he was attracted to artistry from a young age, watching his mother decorate curtains for women in their village. The first strips he saw were imports from France – like the “Rangers” series about WWII. Once he flipped those pages, Kassai was hooked.

“They told a story,” he says with a broad smile. “It allowed us to know what was happening in another world, a different world.” His father didn’t think an artist’s life was a “good path,” so Kassai drew in the dirt outside his home or secretly in his room. “My father would check my notebooks when I came home from school to see if I had been drawing,” he recalls.

When he was older, a U.S. missionary saw his talent and hired him to illustrate manuals. Those gigs helped convince Kassai’s father that his pastime paid well – especially once his father lost his job.

“Cartoons saved our family,” Kassai explains. And now they might be helping to save others.

Medecins Sans Frontieres has hired him for a series of illustrations showing that weapons aren’t allowed in their hospitals, that violent behavior is not appropriate in hospitals and that ambulances need safe passage. They printed 400 posters and 1,000 leaflets to distribute in areas where the organization works.

“I needed an illustration that everyone can understand just by looking at,” MSF’s field communications manager Natacha Buhler says. Her colleagues in the northwest – in an area riven by recent clashes – told her they’d seen an armed man notice one of Kassai’s posters outside their health centre. He stopped short and put down his gun before entering.

Kassai typically arrives at his studio around 8 a.m. The long office is packed with drawings in every stage of completion. Picture frames are stacked on the floor, books are piled behind the workspace, which is totally clear save for paint bottles and paper.

On a recent Friday morning the studio was already hot but Kassai left his small blue fan off and the radio on in the background, broadcasting calls from listeners about politics and a report about the Rohingya crisis in Myanmar.

He painted slowly and deliberately, one coat of color at a time to fill in an outline on the page. The scene showed a rebel roadblock set up to collect unofficial taxes. Kassai mixed a blue, dabbed it, then painted in a man’s shirt. Shoulders hunched, he painted steadily for 30 minutes, then paused to check his phone before redipping his brush.

While Kassai still does NGO work, he’s also working on a new graphic novel — a follow-up to his first, Tempête Sur Bangui (Tempest in Bangui) — which will continue telling the story of CAR’s struggles. This is his passion, recording his country’s history for future generations. He’s writing the word bubbles as well as doing the drawings.

He is drawing gold mines run by armed groups, rebels torching houses. Other scenes show market women carrying their wares and a fisherman carting his catch along the river — all portrayed in meticulous and stunning watercolor.

To ensure that the tradition of comics lives on, Kassai has been training young artists. One of Kassai’s proteges, 27-year-old Yvon Gandro, is a ready disciple.

“I put everything into my art,” he declares.

Gandro lost both parents as a boy and was raised by an aunt. Smiling, he recounts how he’d steal her black eyeliner, eyeshadow and lipstick to draw since he couldn’t afford crayons.

“The drawings were my only friend,” he says, voice going soft. “They replaced my parents. It gave me a bit of paradise, a little joy, to create an imaginary world.”

When his aunt discovered where her makeup had been going, she wasn’t angry – she was impressed by his talent and devoted herself to supporting his artistry.

Gandro did a stint in art school and met Kassai in 2008 at a workshop, where he was introduced to comic strips and watercolor — “so different” from all he’d previously learned.

“It was another world,” he recalls. “It was great.”

Like his teacher, he has done work for U.N. groups on road safety, first aid, hospital protocols and more. While he doesn’t like depicting violence – “I get sad when I do those” – he believes such images have a greater purpose.

“If we don’t do this work, tell the stories, our children won’t understand and they will suffer another violence.”

Take a strip on disarmament that he did for the U.N. At the end of the illustrated sequence, the disarmed rebel gets a job. “It shows that good can happen,” Gandro says. “Maybe it will show that the path of violence isn’t a good one.” That’s why he’s dedicated to continuing his work.

With a boyish smile, he observes that his father had wanted him to be a doctor. “I became a doctor with images,” he says, “a healer through images.” Having young artists like Gandro on with comic strips in CAR means everything to Kassai.

“For someone who is not Central African to tell our story, it won’t work,” he insists. “I want to show the reality [here].”

This story originally appeared on Goats and Soda section of NPR.org. The story was written by Cassandra Vinograd who is a freelance journalist working in Africa, Europe and the Middle East. She previously worked for NBC News, the Associated Press and The Wall Street Journal. Reach her @CassVinograd