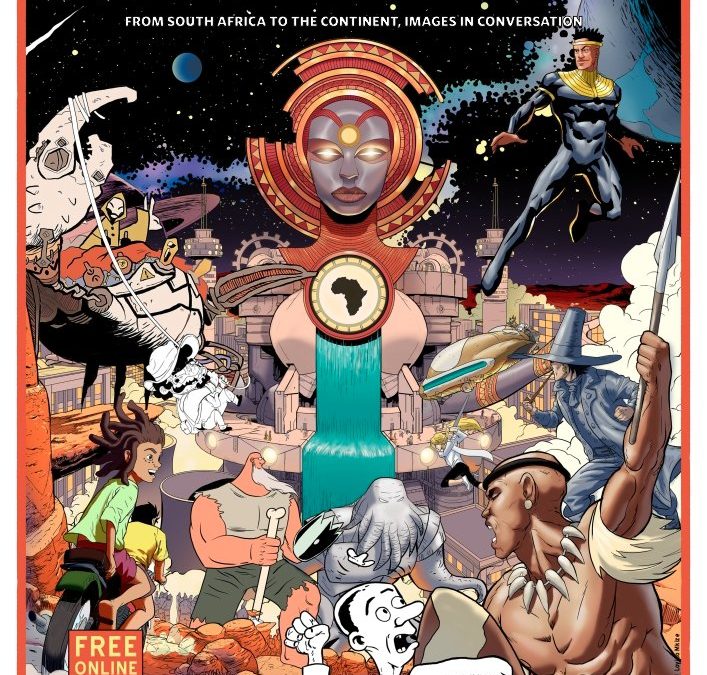 This post on Afropolitan Comics originally appeared on Le’Afrinique.

The French Institute of South Africa (IFAS) is proud to partner with the Cité Internationale de la Bande Dessinée et de l’Image for a virtual exhibition, Afropolitan Comics: From South Africa to the Continent, Images in Conversation.

This virtual exhibition focuses on the diversity of African comics through an innovative experience, which will be part of the virtual National Arts Festival. It has been conceived within the context of the current pandemic, and follows last year’s Art of Comics exhibition, which was held at the Johannesburg Art Gallery with the partnership of IFAS and the Cité Internationale de la bande dessinée et de l’image, and the support of Total.

Afropolitan Comics aims to present a conversation between South African comics and comics from other African countries. It showcases the work of 16 artists and is organised around three themes: “Autobiography”, “Heroes and History” and “Folklore and Future”.

The virtual exhibition will be part of the official program of the virtual National Arts Festival, which is set to take place from 25 June to 5 July 2020. It will also be part of France’s Year of Comics, a celebration of the “Ninth Art” (as French speakers call it) through multiple events and exhibitions.

“We are very proud of this new collaboration with the Cité Internationale de la Bande Dessinée et de l’Image within the scope of the Year of Comics in France”, said the Ambassador of France in South Africa Aurélien Lechevallier. “This innovative project is a unique opportunity to share these amazing artworks with the greatest number of people, and to build bridges between different approaches of comics on the African continent.”

This innovative cultural experience will be free to view at afropolitancomics.com from 25 June 2020 onwards. It will allow users to browse the artworks and the analysis by the exhibition’s curators, as well as watch exclusive interviews of the selected authors.

“This digital exhibition offers a new way to discover and appreciate creators of greatest talent. Whether you are in France or on the African continent, or anywhere in the world, this project will allow you to discover comics from South Africa but also from across the continent. More than ever, the Ninth Art transcends borders.” added Pierre Lungheretti, director of the Cité Internationale de la bande dessinée et de l’image.

The creative minds behind the online exhibition

Afropolitan Comics is curated by Tara Weber (curator at the Johannesburg Art Gallery) and Raymond Whitcher (comics author and researcher) for the South Africa side, as well as Jean-Philippe Martin (scientific advisor at the Cité) and Joëlle Epée Mandengue (comics author and director of the Bilili BD Festival in Congo-Brazzaville) for comics from other countries on the continent. It is conceived and developed by French creative and digital studio Cher Ami.

Afropolitan Comics will be accessible online at afropolitancomics.com from June 25, 2020.

16 African Superhero Comics You Should Check Out (2020)