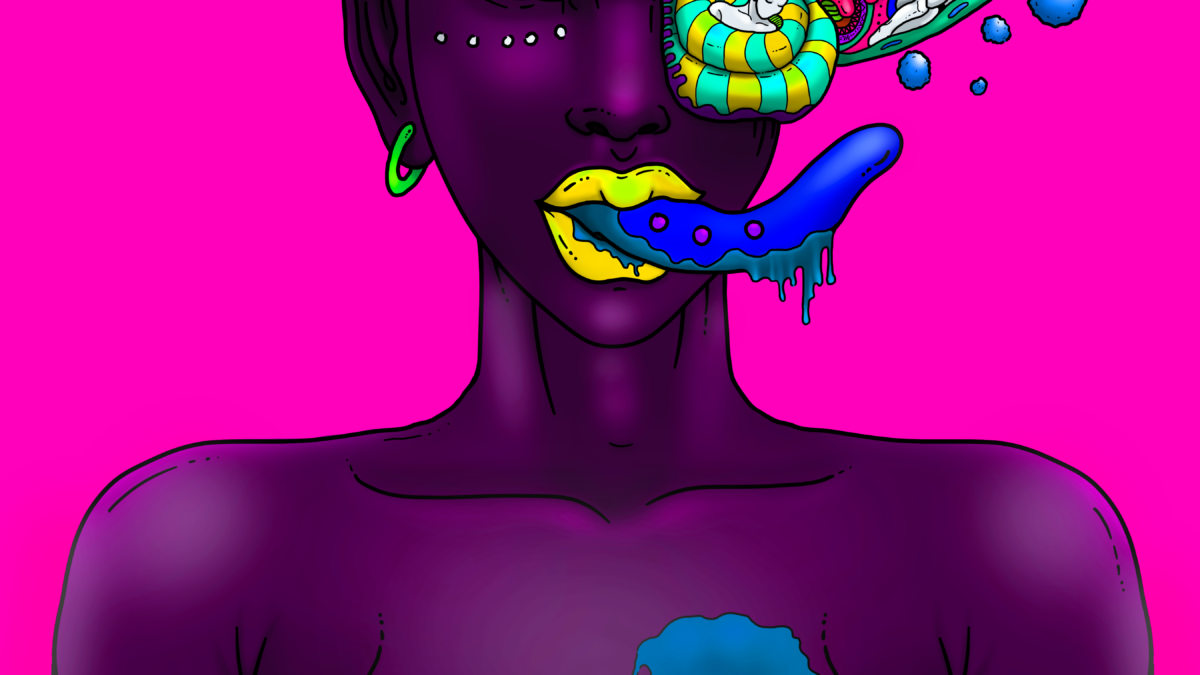 Squid Alley with Kaz: Inspiration is Endlessly Pouring In

In July 2017, we started Squid Alley, an initiative that shed light on some of the creatives — illustrators mostly — whose work we were in love with. The goal was and still is to get right into it by asking very quick and direct questions. We took a pretty long hiatus but we’re back now! And to swing the initiative back in full gear is Kaz, an Accra based illustrator, graphic designer and by association with Akotowaa (an awesome contemporary writer and author of the book cover above), weaver of intricate stories through his art.

Below is our Squid Alley interview with Kaz.

I work with my laptop and a graphics tablet for digital projects. Currently, I use a Huion H610 Pro and it’s pretty awesome considering it’s price. When I’m looking to do something more spontaneous I go for these cool PaintON sketchbooks by Clairefontaine and pretty much any pen I can get my hands on although I do have a soft spot for pencils paired with Graph’it fineliners.

Inspiration is endlessly pouring in from pretty much anything I can experience with my five senses. My daily commute to work, the music I listen to, my friends, the beach and sand in between my toes, it’s overwhelming most of the time. I pretty much go to war mentally before I work cause it’s hard to decide what to focus on.

3. What challenges do you face as an artist?

Time. The lack of it to be more specific. I doubt there’s any artistic pursuit that’s beyond me but making time to study and move to executing a solid project out of it all just keeps getting harder and harder. I’ve come to appreciate just how precious time is with all the extra roles I’ve grown into and I’m sorely tempted to drop some of them for art

4. What’s your favourite and the most fun piece you’ve ever worked on?

Lol! I don’t have one. My approach to art has always been from a place of love and slightly insane obsession so I don’t ever stop to think of which project I enjoyed the most cause every one of them is just me having the time of my life even if it’s some boring commission I take on for dough.

5. Who do you absolutely listen to when you work?

I have a huge playlist for my work sessions but if I absolutely had to make a choice I’d pick Alina Baraz (Urban Flora project with Galimatias), Esta, La Meme Gang, Kay-Ara, Anderson Paak, Ko-Jo CUE, Odunsi, Noname and I know this question sounds like I ought to pick one but I really just can’t

more things than I can mention. I watch loads of movies although I wouldn’t go as far as calling myself a film buff, scour the internet for new music (shouts to Harmattan Rain), draw, draw some more, skate in the skies (what’s up AmaaRae? *wink wink*), birdwatching, sex, shadow boxing, reading, a little more drawing, I’ve come to appreciate hanging out with friends and just talking about stuff and I believe with all my heart that going to the beach and staring at the sea is fun.

7. You have 24hrs in the Squid Time Tunnel to change something about your past. What would it be and why?

I’d go give young me a sound haranguing for listening to people’s opinions on his craft, tell him to believe in himself more and definitely not quit art cause he really can’t and there’s no need to waste two years trying to. Also if I can sneak in one more thing, I’d stop my poor, adorable Alpha (may he rest in adorable, puppy peace) from following me to the junction. It’s a long, sad story.

8. What’s your hope for African comics, games and animation in the next 3 years?

Definitely to see them become more accepted in mainstream media and to see all the awesome locally grown franchises that could spring out of that acceptance. I hope more people become aware of what a we’re sitting on culturally and be more encouraging to young artists. That last part mostly it’s something I wish I had growing up.

9. The Triomphant Bonus: Who are your top 3 African creatives across comics, games, animation, music, technology etc?

, Hanson Akatti and Bright Ackwerh. Three is such a small number but I’ll probably write a book if I keep going, there are so many amazing creatives on this continent!